We went to the market one day without the stroller, which we often do these days. She was busy touching everything (gently, phew!) while I shopped for produce. I saw her taking the mango, took it from her and put it back in the box. We continued shopping. At check out, I was too busy keeping an eye on her and simply gave the shopping basket to the produce store owner. Quickly paid the $$ and grabbed the bag and Lynn, before she could cause any damage to the fruits. We slowly made our way home and got up the stairs. I opened up the bag of grocery, and there it was, a mango, the very first item she's ever bought.... tasted pretty darn good, too.

Went to the corner store to get some whole milk and cheese. We have been cooking omelets for breakfast and cheese is a must for J's omelets. Bought some cheddar and pepper jack. Lynn insisted on carrying the cheddar cheese and I let her. By time we got home and I put away the milk, she had already managed to bite open the package and tasted the cheese. She even ran away from me, into the bedroom, thinking that I will take the cheesy goodness from her. ha ha.
Posted by id_anomaly at 6/28/2008 07:29:00 AM 1 comment: Links to this post

In case you want to be nerdy/neurotic/healthy about what you eat, here's an interesting site I stumbled upon today looking for nutrition facts about seaweed: 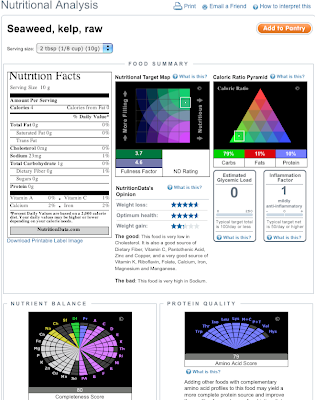 pps. 開玩笑，如果要我當發言人，我發言之前當然會把素情搞輕此。。。然後再站出去烏龍旋桌，這樣才不會打到自己，我才沒他馬的那麼笨咧～～～XD
Posted by id_anomaly at 6/25/2008 02:34:00 PM No comments: Links to this post

鼓爸：「you listen to mommy and behave.」

This is F-ed up

$12B in Taiwan Arms Deals Suspended for Talks

TAIPEI - When the news broke that the U.S. government had suspended about $12 billion in congressional notifications for new arms for Taiwan, it rattled local military leaders and their supporters in Washington.

The action apparently violated the 1979 Taiwan Relations Act (TRA), which guarantees defensive arms sales to Taiwan, and contradicted the spirit of the 1982 Six Assurances, which assures Taiwan that Washington would not consult Beijing on arms sales.

But U.S. officials were acting on the request of the self-governing island's new Chinese Nationalist Party government, who feared that ongoing arms negotiations might jeopardize talks with Beijing, the first in more than a decade. Nevertheless, there is no indication when the suspension might be lifted; some predict it will last into the next U.S. presidential administration.

Sources in Taipei say the KMT government asked Washington to suspend arms sales for the duration of the talks, which began June 12 and whose most immediate concern is establishing direct cross-straits charter and airline flights.

"The [KMT] administration, given the unforeseen governing difficulties encountered at home so far, eagerly needs achievements on the weekend chartered flights and mainland tourists, both requiring Beijing's cooperation," said Lin Chong-Pin, president of the Taipei-based Foundation on International and Cross-Strait Studies. "Once the KMT makes the first scores, it can worry about the arms sales later, which do not seem urgent for the moment, at least."

But some fear the freeze could last until a new U.S. administration takes office in January.

"This could become a watershed event for future arms sales to Taiwan," said Mark Stokes, the Pentagon's country director for China and Taiwan from 1997-2004.

If the freeze is still on when Congress breaks in October, Stokes said, the notifications could be delayed until the next White House administration takes office.

"It's the law of physics. Once you lose that momentum, it's nearly impossible to get it back," he said.

Much of this was originally promised by Bush in 2001, but blocked by political bickering in Taiwan until 2007.

"KMT's priorities, though not officially stated, appear to be first, economic growth, which is predicated on good relations with the mainland; second, political dignity; and third, military security," said Lin, who served as a former Taiwan deputy minister of defense. "The March 22 presidential election could be viewed as an unannounced referendum on the prioritization of long-term national goals. The order listed above was the result."

The KMT swiftly launched a dialogue with Beijing about direct flights. Weekend direct charter flights for tourists are expected to begin in July, and are likely to expand into daily regular flights within a year. By the end of 2009, Taiwan expects some 3,000 mainland visitors a day.

President Ma Ying-jeou has discussed economic and peace accords openly with China within five years and promised there would be "no arms race with China."

This would ease cross-strait tensions but could also lead to the end of U.S. military support for Taiwan. Beijing is likely to demand that Taipei tie itself closer to the mainland and end military-to-military relations with U.S. forces.

Sources in Taipei and Washington say pro-China advocates in the U.S. government, dubbed the "Panda Huggers," have lobbied to disrupt U.S. arms sales to Taiwan.

One U.S. government official said officials in the U.S. Embassy in Beijing, the U.S. Treasury Department and the U.S. State Department are conspiring to kill arms sales to Taiwan. Some want to open Chinese markets to U.S. firms, some want to save the Six Party Talks with North Korea by placating China, and some are laying foundations for private business deals after they leave government, the official said.

Ma plans to continue pursuing U.S. arms after the talks with Beijing; F-16s are on the top of the list. But the "new government needs time to review major policy guidelines based on Ma's 'Hard Rock' defense concept," said one source close to the Ma government.

"There exists an atmosphere of 'one customer at a time' in the government," he said. "They want to focus the energy on managing the resumption of regular cross-strait dialogue, as this is Ma's first priority and deliverable. Most of the top officials I've talked to insisted that they will thoroughly debrief the U.S. government regarding cross-strait progress, and remain committed to 3 percent GDP defense spending and continue defense procurements from the U.S."

However, there are fears Ma will not be able to please both pro-Taiwan elements in Washington and pro-unification forces in Beijing. The result could alienate both parties, leaving Taipei even more isolated. ■

稍早前看到美國凍結對台軍售就覺得事有蹊蹺，原來真的是高竟戶為了跟中國談判直航問題而要求的。最近很少貼政治文，因為自從高宗痛就職之後看到的新聞都只會讓人想開罵，眼看著台灣主權一步一步的被犧牲掉，真的是↑％＄＃＃＠＠！！～
Posted by id_anomaly at 6/19/2008 01:03:00 AM No comments: Links to this post

記錄一下小鼓近日的吃食。
just a record of what baby's been eating these days.

[中午十一點至二點之間睡午覺，每次睡大約一個半小時。she now takes one nap during day time between 11 am- 2 pm, for about 1.5 hours.]

稀飯內容 Congee
豬肉、豬肋排、或雞腿加入洋蔥、青蔥、蒜頭或月桂葉熬高湯，肉撈起來大人吃掉，然後加入白米、糙米或麥片熬成粥。有時加入青菜，青菜種類包括胡蘿蔔、高麗菜、芹菜、菠菜
Congee is cooked with stock made of pork, pork ribs or chicken drumsticks with onion, green onion, garlic or bay leaves. Mama eats the cooked meat. With the stock, add rice, brown rice or oats, cooked till it turns into thick congee. Sometimes vegetables are added into the congee, including carrots, cabbage, celery, or spinach.

飯後水果：香蕉或葡萄
after congee, sometimes she'll also have some bananas or grapes

早餐吃完後輪到大人吃早餐的時候，跟著在旁邊又吃一點蛋、馬鈴薯、蘿蔔糕、麵包等等 （只要大人吃東西都要分一口就對了）
after breakfast when it's adult's turn to have breakfast, she will also have some egg, hash brown/home fries, turnip cake, or bread. (she must have some of the 'grown-up' food whenever we're eating.)

下午點心－以下食品中的數種組合，不是全部都吃：
snacks for the afternoon- a combination of the following:
水果：香蕉、葡萄、蘋果、杏桃、水蜜桃、櫻桃、或其他水果
fruits: banana, grapes, apple, apricot, peach, cheery or other fruits available at the market
cheerios
yogurt or cottage cheese
強索媽媽的下午點心（飯、麵、米粉、麵線、肉絲不一定）
insist on eating whatever mom's eating for snack (rice, noodles, or some meat)
餅乾 cookies
鮮奶 cow's milk 150 c.c. （必喝 must have）

晚上比較晚睡覺又爸爸正好比較早下班的話，還會跟著大人吃大人的晚餐（飯、麵、青菜、馬鈴薯泥 ...）
if she goes to bed later and dada happens to have come home earlier that night, she will also have whatever we're eating that night.
Posted by id_anomaly at 6/18/2008 04:57:00 AM 2 comments: Links to this post

The Silicon Shield documentary will explore the political and economic situation in the Taiwan Strait and implications for the global high tech economy.

It will show how Taiwan built a unique defense strategy against aggression from China, the so-called Silicon Shield. Taiwans semiconductor industry would protect the island from attack as cross-strait tensions brought military conflict with China closer to reality.

When completed, the program will air on national public television in the United States, Europe, Japan and other developed nations. The producers are seeking financial contributions to fund the production of the documentary.

The filmmakers will use talking head interviews, combined with archival and modern day film footage, to tell the story of the Silicon Shield and how it will protect Taiwan. The documentary concept is based on the book, Silicon Shield, published in 2001. Filming begins in Taiwan in September 2006 and continues through 2007, both in Taiwan and the United States. The producers plan to have the documentary completed and ready for broadcast before the 2008 Taiwan and U.S. presidential elections.

帶一個 toddler 一天下來真的是蠻累的，因此前一陣子沒什麼案子沒錢賺我也都沒有怨言。不過最近可能累積下來的睡眠不足與過勞開始 taking its toll，感覺身體很容易疲倦，然後就在這個時候，事情就接二連三的來。白天累翻了晚上還要上工敲鍵盤，真是。。。 What can I say, life is good.... orz
Posted by id_anomaly at 6/03/2008 09:17:00 AM No comments: Links to this post

Email ThisBlogThis!Share to TwitterShare to FacebookShare to Pinterest
Labels: ranting