In Paris, a 'Red Balloon' with an Eastern Air 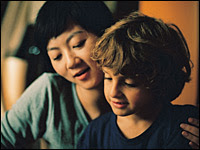 “Hou is a Taiwanese filmmaker who tells slow, meditative stories, often centering on the act of storytelling itself.”

Fresh Air from WHYY, April 11, 2008 · In the past few years, we've seen many pointless remakes of old movies. What we haven't seen enough of are fictional films that engage in a kind of dialogue with the movie past.

I don't mean Quentin Tarantino's amusing homages to the grindhouse ecstasies of his youth. I mean something like Hou Hsiao-hsien's new Flight of the Red Balloon, a masterpiece that uses as its springboard another masterpiece — Albert Lamorisse's 1956 The Red Balloon, that lyrical fantasy of a French boy followed around Paris by a devoted balloon with a mind of its own.