Got this from Stop_george's comment on Michael Turton's blog here .

STOP_George said...
.
.
.
Take a look at the caption below this BBC picture.

Thank goodness for balanced international reporting, huh?! I mean, it's so good of the BBC to implicitly point out to us that an increasing missile count can also be symbolic of love.

I swear, it's time the Taiwan protesters get sarcastic with the international media. The next time they use these plastic missiles, hold up a huge sign behind them saying, "Threat? What threat?!"
.
.
.

I'll relay the picture and what the caption reads here: 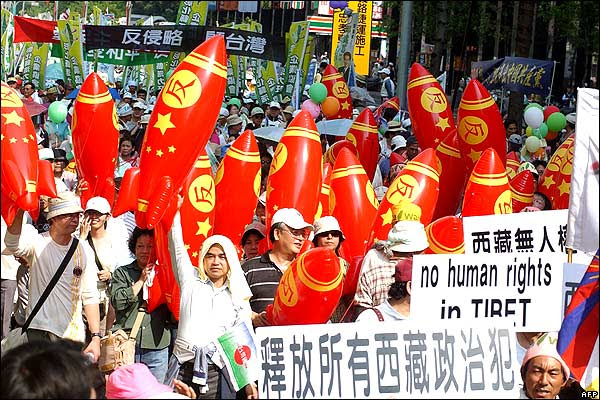 [FYI]
Simple logic: if there're about 800 missiles pointed at your country, it is a REAL threat, and a REAL threat will be PERCEIVED as a threat and not anything else. If they have to actually fire the missle at you to be considered a threat, then it's WAR. Capice?